FREE SHIPPING ON ALL USA ORDERS

Back in 2016, the Virginia Center for Reproductive Medicine ("VCRM"), one of the nation's leading fertility centers, offered a guide to a growing fertility problem - low sperm count and poor sperm quality - and how it can be solved.

"We offer a full range of fertility services, from in vitro fertilization and genetic screening to egg freezing and surrogacy - with one of the highest success rates in the country," said Fady I. Sharara, M.D., FACOG, founder and Medical Director of the VCRM.

One of the challenges of maintaining that high success rate, however, is solving the problem of male infertility. When couples have trouble conceiving, the conventional wisdom is that the fertility problem typically lies with the woman. "But that's true in only about 40% of cases," added Dr. Sharara. “In another 40% of cases, the problem is male fertility - low sperm counts and poor quality sperm."

There are also disturbing data suggesting that sperm counts and quality are declining in the U.S. and around the world, because of diet, pollution, sedentary lifestyles, and other aspects of modern life. According to Dr. Sharara, "When people do not eat well, or when they are overweight or smoke or take drugs, the sperm suffers."

The good news, however, is that male fertility is a treatable problem. The steps to take, Dr. Sharara advised, include:

Which supplement should men take? "We have tried a number of supplements that claim to improve sperm," commented Dr. Sharara. "Most include an amino acid called L-carnitine that has been shown to increase sperm count and movement." 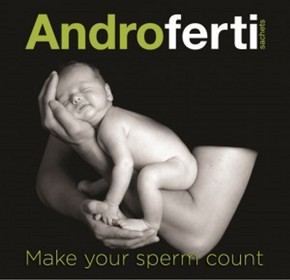 But the supplements don't all work equally well. The best by far, in VCRM's experience, is Androferti®, which contains vitamin C, coenzyme Q10, and vitamin B12, in addition to L-carnitine. Dr. Sharara said since when they switched to Androferti®, the improvement has been impressive: "We are seeing more than 50% improvements in sperm count, morphology, and motility. That's also similar to what has been shown in shown in clinical trials."

"This is one of the best, if not the best, products on the market," said Dr. Sharara. "I believe it could help couples conceive the children that they so desperately want."